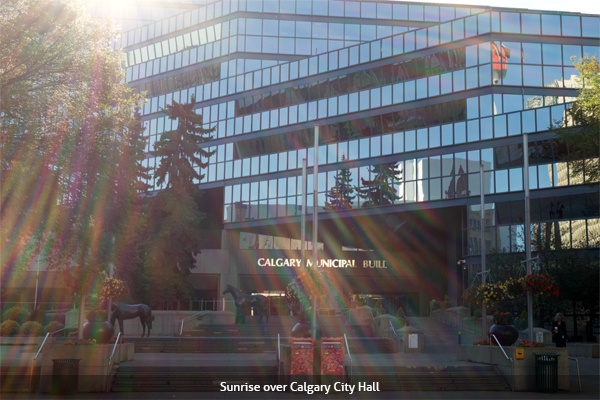 After a couple tough years in Calgary, the term diversification has become pretty common in conversations about the economy. The recent downturn reminded some and introduced others to how entangled the city’s vitality is with the price of oil.  This recession seemed to have a particularly nasty sting to it, possibly because of how the very commodity that pulled the rug out from under us had recently helped us weather a major economic shock. Most Calgarians remember this timeline:

The subprime mortgage crisis of 2007, the 2008 Financial Crisis and the ensuing Great  Recession had left many economies around the globe struggling to recover losses. But thanks in part to a prudent monetary policy,  Canada was relatively less affected than any other G7 country.  By 2012, in Alberta specifically, the government announced that the province had completely recovered “all output losses sustained during the ‘great recession’”.  The report went on to declare oil and gas services growth had been 18.3% between 2008 and 2011. It looked as though Alberta’s energy resources had sheltered the province from the economic disruption felt elsewhere.  And then things got even better: June 2014 oil prices for West Texas Intermediate passed $110 a barrel.

Fast forward nine months, though: a barrel of oil is trading for $42, the energy industry in the province collectively loses $600 million in three months and 25,000 oil patch jobs vanish (CBC, 2015).  Over the next year, oil eventually bottoms out at $30 a barrel and Alberta’s GDP contracts by twice the magnitude of the previous four recessions.

The boom and bust rollercoaster of oil prices is not a fun ride.  On the bright side, however, it ramps up the focus on expanding Calgary’s portfolio.

Calgary is actually chock-full of innovators.  At the moment, Calgarians are filing patents at triple the rate of the rest of the country. And the truth is, Calgary has been innovating for a long time.  As Dr. Terry Rock, CEO of Calgary Technologies Inc. puts it, “our reputation lags the reality”.  He goes on to say that Calgary has been “diversifying our economy all along” and stresses that it’s important to do more to tell the story of the innovation that’s happening in the city to take it to the next level. 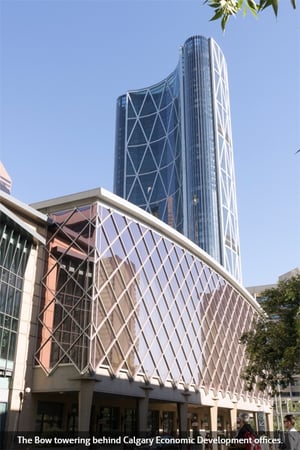 Calgary Economic Development (CED) has been doing just that. They have been working hard to facilitate diversification by attracting tech companies to the city with a rich innovation ecosystem.  Mary Moran, President and CEO of CED knows that for entrepreneurs to succeed, they need access to talent, investors and incubator or accelerator spaces such as new Calgary resident, RocketSpace.  In terms of talent, Calgary has a high proportion of science, technology, engineering and math (STEM) graduates - nearly 18% of all university degrees in the city are in the STEM fields. Additionally, the Alberta government recently passed Bill 2, the Growth and Diversification Act which will “boost high tech training, add new supports for digital media and bolster tax credits to stimulate investment”.  Significant supports to the tune of $50 million for scholarships and improving teaching spaces.

Calgary software startup Aimsio is part of the of the tech innovation that had been underway before the focus on diversification intensified.  Getting back to timelines:

Aimsio was founded in late 2013.  For the next twelve months, oil prices sit over $100 a barrel and Aimsio’s target market is brimming with prospects. It’s a good time to start a business. Then, in July 2014, prices start to slide.  For the next 18 months, the economy contracts, the energy industry cancels projects, eliminates jobs and morale in Calgary becomes tenuous. The vacant office space tally reaches ten million square feet and the term “downturn” begins to pervade conversation. 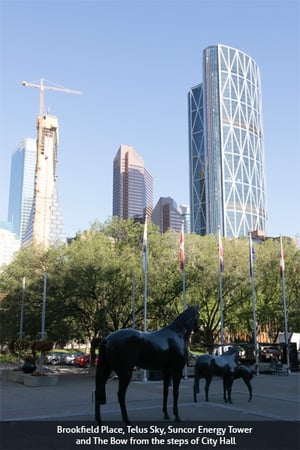 Proof of the strength of Aimsio’s value proposition came with timing of their seed round cash injection.  At the end of March, 2016 after nearly two years of month over month losses in the energy sector, Aimsio obtained $4MM in venture financing.  Founder and CEO Ash Esmaeili recalls,

“The volume of investment in the energy sector was really low at the time. But, we were able to secure funding because what we have is so vital in a tough market - our software actually helps companies increase efficiency, sustain profits and remain viable”.

Aimsio used the funding to build its technical team and on sales and marketing efforts which garnered attention from the North American tech startup scene.  Over the next twelve months, the company was invited to Silicon Valley by C100 for 48Hrs in the Valley, to Palo Alto for winning the Canadian Technology Accelerator Program and to Kelowna to as one of Metabridge’s Top 15 Canadian Startups.  In August of 2017, Aimsio was recognized by Start-up Canada with their High-Growth Start-up Award, Prairie Region and later that year, Co-founder Abbas Sarraf was featured on the cover of Invest Calgary magazine.  Most recently, Aimsio was shortlisted by The Global Petroleum Show for the Innovations in Technologies: Digital Award. 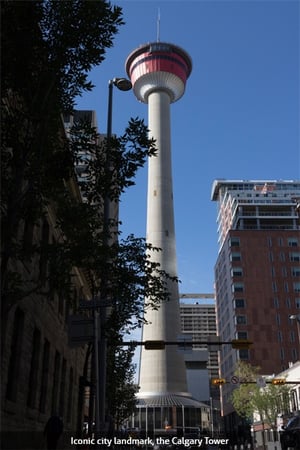 While these accolades are a much appreciated nod to their innovation and hard work, the Aimsio Founders are extra proud of being active contributors to the digital shift in their city. One way they enjoy getting involved is through speaking engagements, which are a great way to spread the word about the benefits of technology for businesses. Ash recently spoke at the Avnet-sponsored Digital Knowledge Bar at the 50th Annual Global Petroleum Show and has upcoming events with the Canadian Heavy Oil Association and the Calgary Construction Association. Also, as University of Calgary alum, remaining in the city and attracting amazing tech talent is important to them. And since reciprocity is essential in a healthy innovation ecosystem, Aimsio is happy to be in a position to contribute mentorship through the U of C Department of Computer Science Industry Advisory Board and the Engineering Career Centre Advisory Board.

Aimsio also has an incredibly diverse and inclusive team: in 2016 they were recognized with the KNOVO Award for Corporate Gender Diversity and overall the team proudly represents an array of the world’s cultures.  With an open co-working space, Aimsio has the progressive atmosphere of a Silicon Valley tech firm that also offers a challenging environment for keen developers: with new software released every two weeks, the pace at Aimsio keeps the team engaged and inspired. Aimsio’s success is Calgary’s success - each thriving tech company strengthens the validity of Calgary’s diversification efforts and attracts more startups to the city. 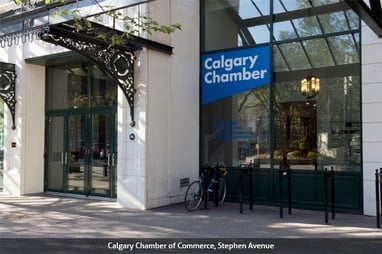 With talent and support for tech companies well addressed, the last piece of the puzzle is attracting more venture capitalists to Calgary’s innovation ecosystem. As Adam Legg, a director at the Haskayne School of Business and former head of the Calgary Chamber of Commerce recently pointed out, Calgary is “competing against cities around the world that are more aggressive, from funding research to funding startups”.  Dr. Terry Rock confirms that “we have all the raw materials to move on the innovation agenda” and identifies investment as one of the essential elements of the innovation ecosystem that needs to be built up.

Promoting success stories of Calgary tech innovators like Aimsio, Ambyint, Benevity, Stream, Symend (a Fin-Tech startup co-founded by one of the original Aimsio Co-founders, Hanif Joshaghani) and Veerum is important. It legitimizes the city as a place for entrepreneurs and disruptors to thrive.  As the oil and gas economy rebuilds, it’s important to adhere to Calgary’s diversification strategy by encouraging investment in Calgary’s tech sector.  Enriching the innovation ecosystem with grants and venture financing will create more success stories, attract more entrepreneurs and create a strong tech sector that could lessen the impact of future energy industry shocks. 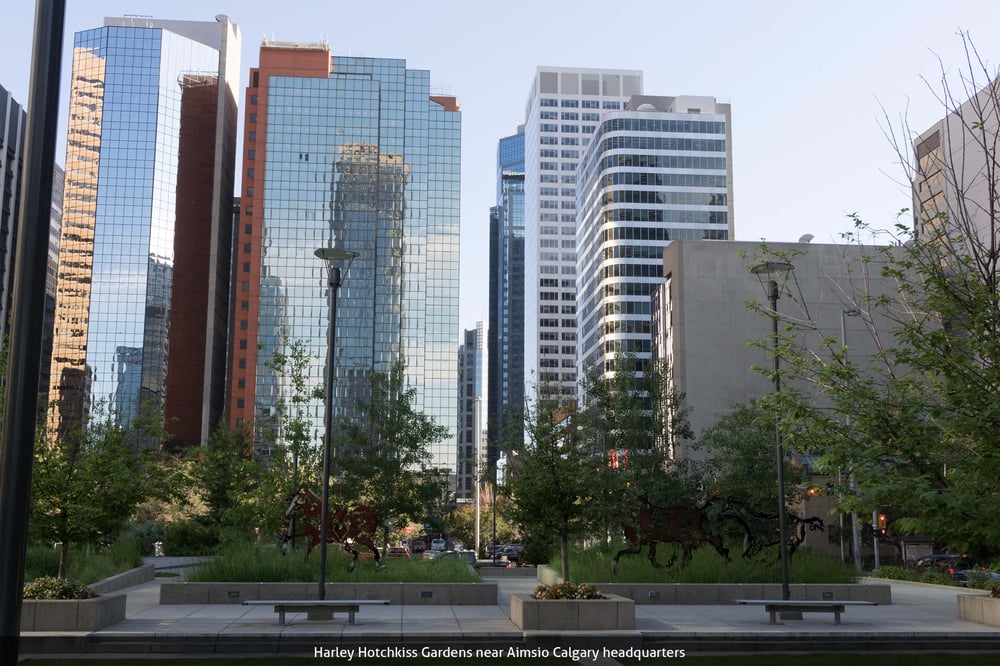 Calgarians Now Have a Place to Talk Construction Tech