Your Guide to Getting a Job at Aimsio

It’s not a joke, it’s Spam Cup. What is Spam Cup, you ask? Grab a cup of cocoa, slide into your dino slippers, and put on your favourite carols while we tell you all about it. Spam Cup is a wonderful event organized by a group called YYCTechGives, so that’s where we’ll start.

Once upon a time, there was a group of tech companies in Calgary who wanted to make an impact in the community. Alone, they could only do so much, but together, they could team up and raise more money for good causes. Today there are over 60 member companies of YYCTechGives. Aimsio is proud to be one of these members.

All throughout the year, YYCTechGives companies are (not) quiet as a mouse. In fact, they like to raise quite the commotion at Calgary Stampeder games, Magic: The Gathering tournaments, and other family events. However, the grande finale is Spam Cup, typically held during the second week of December. This is when 25 YYCTechGives member companies sign up to compete against each other to see who can pack the most food for the Food Bank.

Not-so-bright (it’s December) and early (arrive at 6:30 am) on the morning of Spam Cup representatives from 25 tech companies show up at the Calgary Food Bank. Parking is sparse, so many a joke is cracked about parking a mile down the road. But for what the Food Bank lacks in parking, it more than makes up for in spirit and generosity.

After everyone signs in, there is a safety briefing. Once that’s finished, the Ringers usually suit up. A Ringer is a team member who is the designated “Spirit Wrangler”, if you will. Their sole purpose is to pump their team up while annoying other teams. Meet our Ringer from 2018.

Once the horn sounds, three members from each team start furiously packing four items of food (mixed fruit, mixed vegetables, stuffing and cranberry sauce) into a plastic bag. Once the bag is tied, it’s placed in a large box that is later weighed. The team that packs the most weight in food wins the Heavyweight Championship. The team that packs a large amount of food and shows the most team spirit wins the Spam Cup.

This year, Aimsio packed a whopping 1,030 pounds of food for the Food Bank. It was enough to launch us into 1st place and we won the Heavyweight Championship (yippee). Peloton took home the Spam Cup by packing 755 pounds of food and knocking everyone over with their drum band and team spirit.

In the words of Dr. Seuss, “Christmas doesn’t come from a store, maybe Christmas perhaps means a little bit more”. At Aimsio we believe in doing the right thing and that means giving back to our communities. Every Aimsian gets one volunteer day per year to volunteer in a way that means something to them. On top of that we attend group events, such as Spam Cup, as a company so that we can give back just a little bit more. We’re always Aiming for Change and this is our way of doing so.

Spam Cup is an incredible event that while always fun, is also for an excellent cause. All of the food packed goes directly to families in need during the Christmas season. In addition to the one day event, all YYCTechGives companies raise money for the Food Bank as part of the CBC Food Bank drive. At Aimsio we are holding card games, foosball tournaments, plank-offs and DOTA matches to raise money. Check out our running tally below. 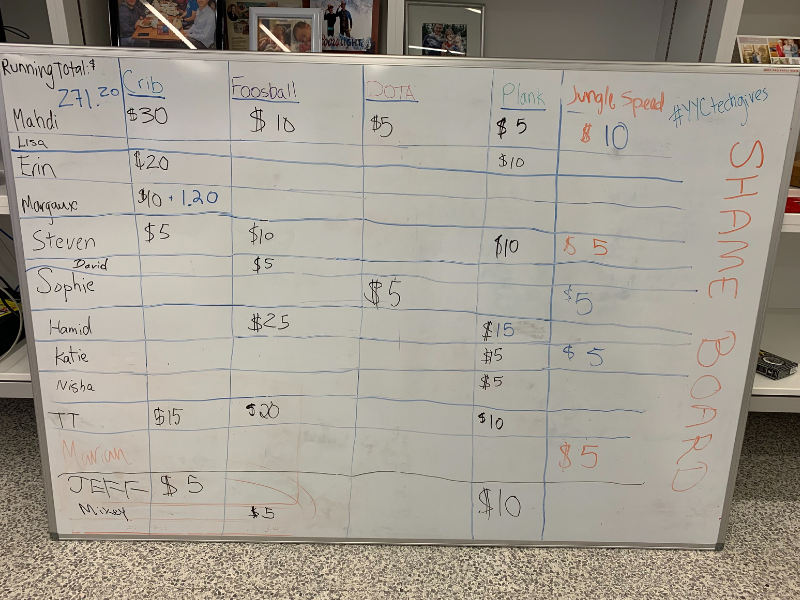 We’re proud to be able to give back and would like to thank the Food Bank for letting us take over the packing floor once a year, CBC for allowing us to be a part of this great cause, and YYCTechGives for organizing Spam Cup.