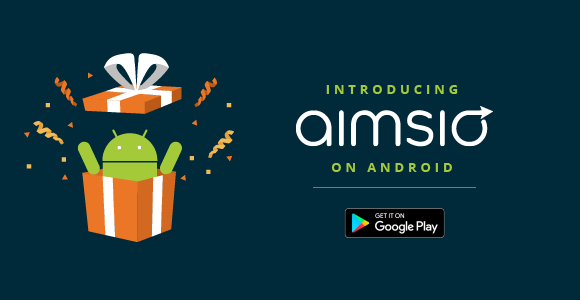 CALGARY (September 13, 2018) - With most relationships, there is a “Facebook Official” moment or a “Let’s take this thing public” moment. This is ours. Aimsio + Android <3.

For the past few months we’ve been toiling away on an Android version of our app. We released a beta version of it in July of this year, but now we’re ready to scream it from the rooftops:

“WE HAVE AN ANDROID APP.”

For the past few years we’ve been an iOS kind of company. It’s not that we had anything against Android. Quite the opposite, in fact. Just ask Meaghan, Steven or Margaux. They’re all on Team Android. They’re also Aimsio employees...in case you were wondering.

Anyways, there are three things we want to tell you:

This is typically the place in a press release where we would insert a charming, natural (and totally not made up) quote. But none of the Co-Founders are around and it’s like the parents have left the kids with no sitter. So, we’ll leave you with, “WE HAVE AN ANDROID APP”, says the Marketing Person.

Aimsio is a software that allows companies with field operations to easily manage their crew, equipment, and projects in the field. Aimsio helps field service companies painlessly transition from antiquated processes and manual paperwork to a streamlined system, where all their operational data is accessible on the cloud. Aimsio has two offices, one in Calgary, AB and one in Vancouver, BC. For more information about Aimsio visit www.aimsio.com.